Innovative Water Solutions for Millions in Horn of Africa

Please don’t complain about the rain…

Here in Western Washington, we have a tendency – a compulsion, maybe even – to complain about the weather. Understandable this year especially, as we’ve had an unusually cool, damp spring.

Just last evening, I went for a walk in my neighborhood, as I do most evenings. It was sprinkling when I left the house just before dinner, but by the time I got a half-mile from home, the sky opened up and unleashed a torrent of rain on me. At first, I sighed in frustration and headed back home, but as the water ran off the hood of my rain jacket, I paused and looked up, letting the water run down my face.

My inner complaint quickly turned to gratitude for the abundant water and lush green landscape that envelop us in this part of the world, and I breathed a prayer of thanks.

My next thoughts were of the people who live in the Horn of Africa, where it has been four years since it rained like this. They are on the brink of famine again. It was the same scenario that led to the 2011 famine that claimed the lives of 258,000 people, mostly women and children who had spent their final weeks walking through the parched desert in search of water and food.

Right now in Somalia, 4.9 million people (31% of the population) are currently affected by extreme drought conditions, and more than 700,000 people have left their homes in search of food and water. Ninety percent of the water sources across Somalia have dried up.

The current drought is already historic in its length and severity, and forecast models are now signaling an elevated likelihood that the October to December 2022 short rains season will also be below average, setting the stage for an unprecedented five-season drought.

An alarming increase in malnutrition rates among children is being seen in Somalia and Kenya. In Somalia alone, 1.4 million children under age 5 are severely malnourished. “If we don’t step up our intervention, it is projected that 350,000 [of those children] will perish by the summer of this year. The situation cannot be more dire than that,” said Adam Abdelmoula, the UN special representative and humanitarian coordinator for Somalia. 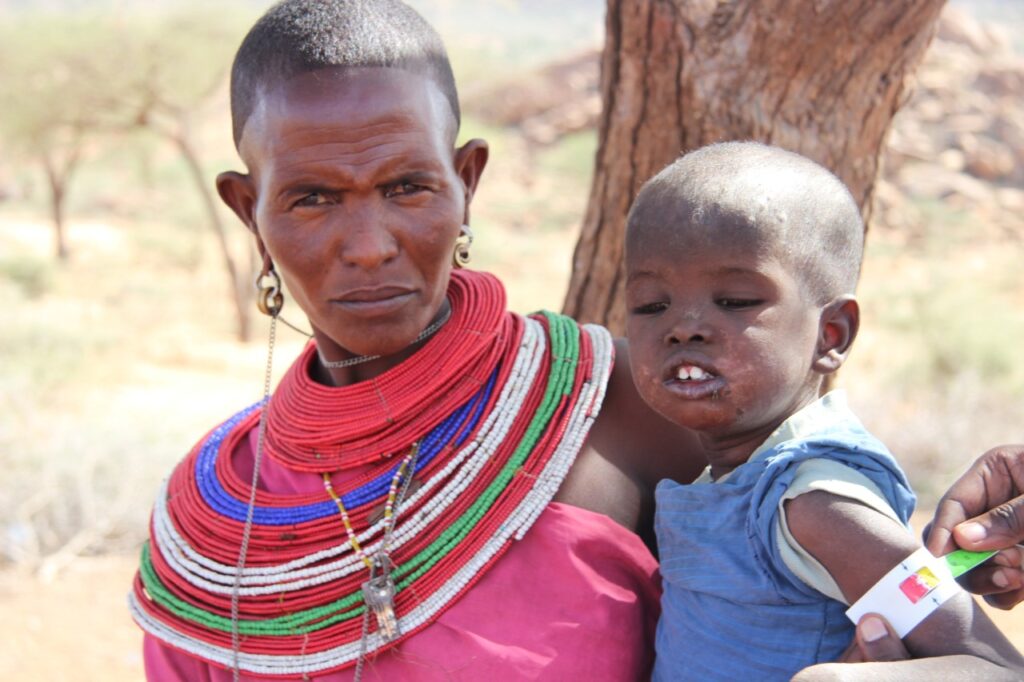 Abdinasir and his pregnant wife and two children, were forced to flee their home in Jilib in the Lower Juba region of Somalia. The drought has destroyed all their crops and insecurity in the region prevented food aid from reaching them. They were headed on foot to a camp for displaced families when their youngest son, Ahmed, died of starvation.

“My little boy was too weak to finish the journey here with us,” said a grieving Abdinasir. “I had to bury him along the way…” 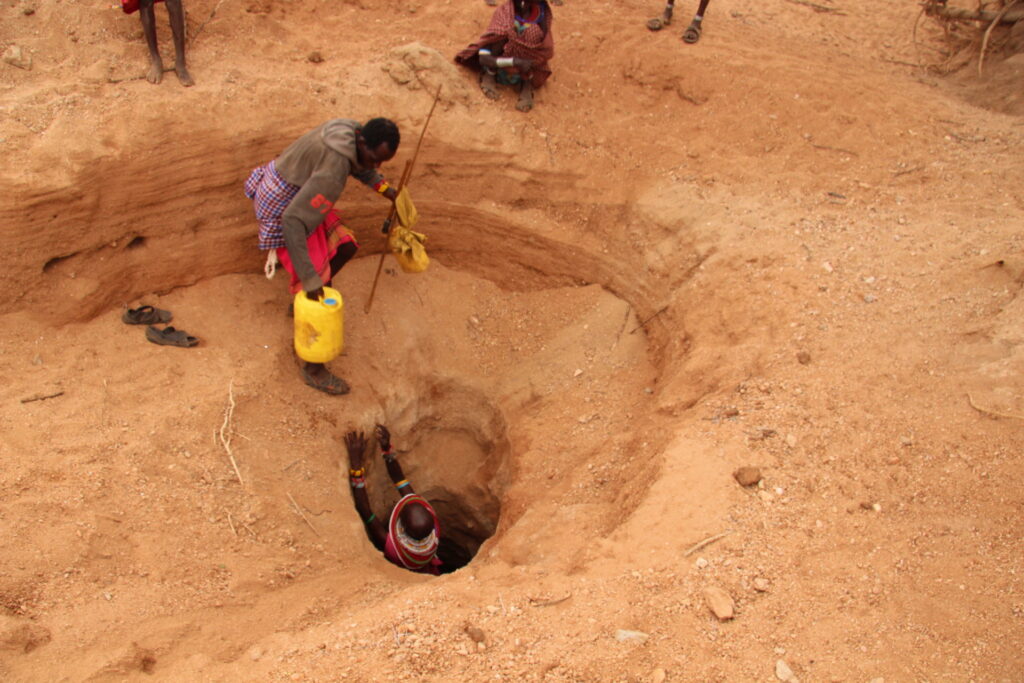 Abdinasir arrived at the camp with his wife and their 4-year-old daughter. A carpenter by trade, he wakes up every morning and walks to Dhobley Town to look for work. “Sometimes I get a job to repair a door or a fence but mostly there are no jobs in this town,” says Abdinasir. “The situation is not promising as my wife is expecting a newborn baby and I have no money or income to sustain us.”

Parts of Kenya are in the throes of drought too. The Famine Early Warning Systems Network (FEWS NET) estimates that 4-5 million people in Kenya are in need of humanitarian food assistance.

More than 200,000 people in Samburu County, Kenya, are in dire need of food assistance. Many wells have dried up and thousands of animals (70% of the herds) have died. The average distance people are walking to get water is 10.2 kilometers.

World Concern is working in partnership with local communities to implement innovative solutions to help families survive the drought.

In Samburu, Kenya, water collection systems that were constructed over the past year are proving to be lifesaving as families are able to access water within walking distance of their homes.

Women have been trained to cultivate kitchen gardens, which include rapidly maturing sweet potatoes, and are continuing to thrive, despite the drought conditions. Children are being monitored and assessed for malnutrition and nutritional supplements are given when needed. 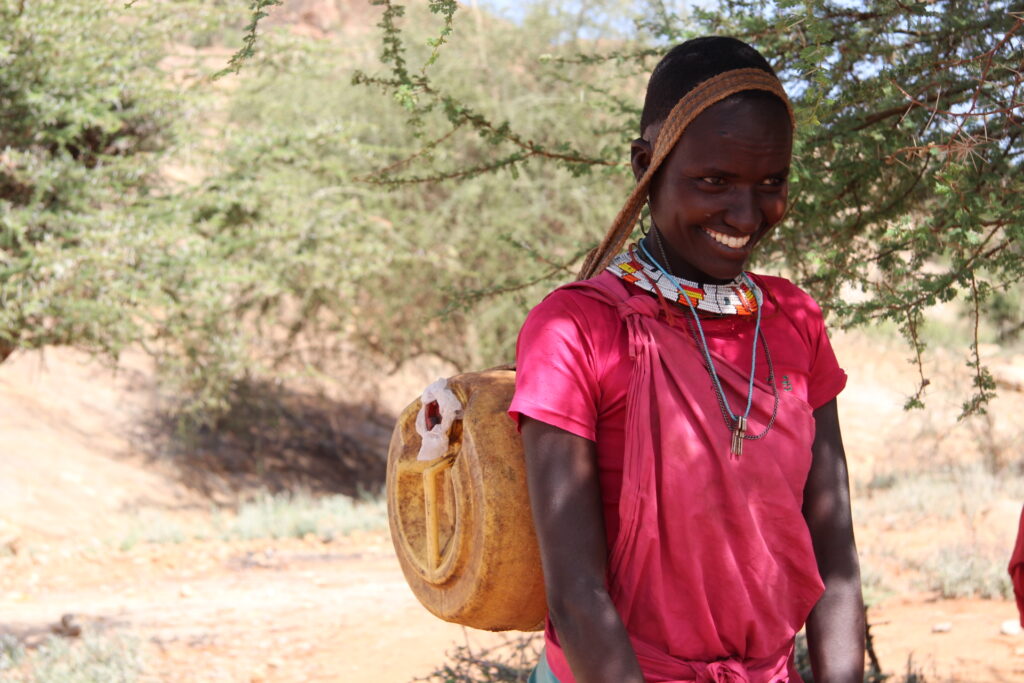 Lema cannot hide her joy as she fills her bright yellow jerrycan with fresh water from the pump that connects to a concrete storage tank in her village. It took the mom of four just minutes to walk 1/3 of a mile from her home to the water point – a daily journey that used to take her half a day.

Before the community partnered with World Concern to construct the rainwater collection system in her remote Kenyan village, Lema trekked 7.5 miles—every day—to a seasonal river (seasonal, because for much of the year it was a dry riverbed).

Utilizing a piece of the natural Samburu landscape, the innovative water system captures rainwater as it runs down a massive rock behind the tank and channels it into the enclosed tank, which holds up to 150,000 liters of water. Community members—typically women, like Lema—access the water from a tap near the tank. Joyful chatter can be heard coming from these mothers as they fill their jerrycans to the brim.

With hours added back in her day, Lema now has time to support and care for her children. “I am now able to fetch firewood and cook for my family because we have water in our village,” she said.

Because of worsening drought in the area, the lines to collect water from the tank are growing longer each day as more people come from surrounding villages in need of water. Below average recent rains filled the tank about three-quarters of the way full, but it’s draining quickly. Families are allowed to collect only 40 liters (2 jerrycans) at a time to conserve the water. 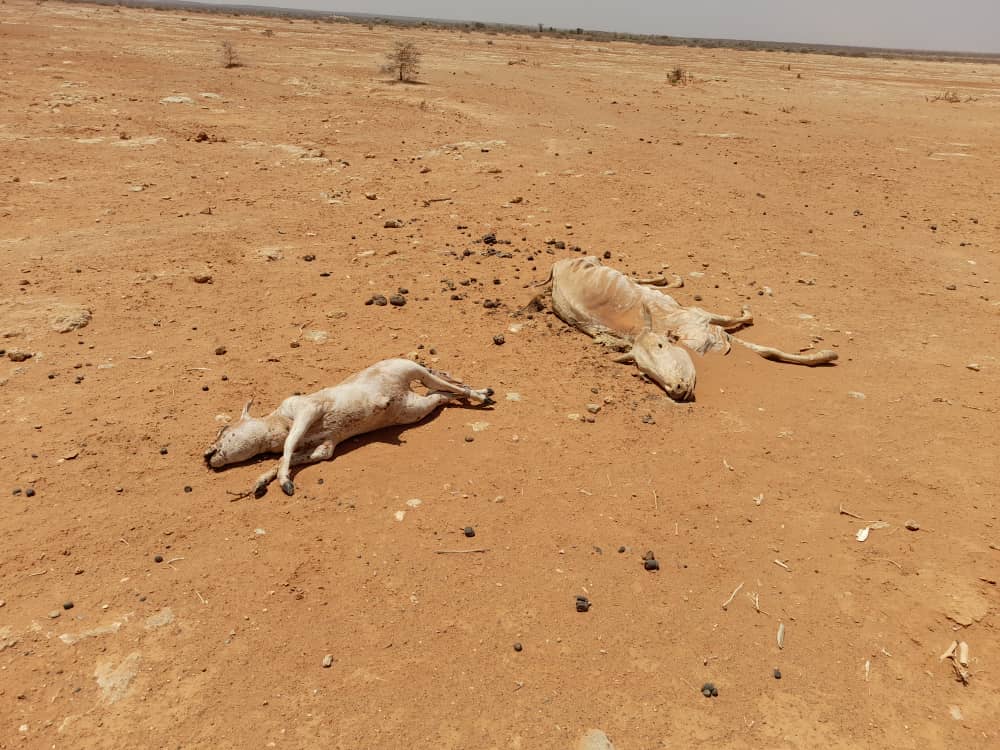 World Concern has supported communities to build sand dams in the area and plans to construct innovative water solutions like a second rock water catchment system in a nearby village, but until it rains, the need for water only becomes more urgent each day.

For more information, or to help support World Concern’s response to the Horn of Africa drought, please visit www.worldconcern.org.